Hearings
A "China Model?" Beijing’s Promotion of Alternative Global Norms and Standards
A public hearing on “A ‘China Model?’ Beijing’s Promotion of Alternative Global Norms and Standards” was unable to be held on the originally scheduled date, March 13, 2020, due to the Sergeant at Arms' decision to temporarily limit access to the Capitol Complex. Witness testimony has since been accepted and posted below. Questions for the record solicited by the Commission will be similarly be posted below once available.
Hearings
China’s Military Power Projection and U.S. National Interests
This hearing will examine China’s ability to project military power and influence beyond its shores, with an emphasis on the country’s development of expeditionary capabilities. An official from the U.S. Department of Defense will provide testimony on how the Administration views China’s power projection and how such capabilities further China’s plans to reorder the Indo-Pacific and other key regions to its advantage. The first panel of experts will explore why and how China is developing expeditionary capabilities, with a focus on the Belt and Road Initiative (BRI) as a vehicle for testing and justifying these capabilities. The second panel will focus on the ‘‘nuts and bolts’’ of China’s expeditionary capabilities, including the PLA’s efforts to improve its logistics organization and expand its access to overseas bases. The third panel will examine how China’s activities in South and Southeast Asia, Africa, and Latin America and the Caribbean further its development of expeditionary capabilities.
Research

Request for Proposals on China’s Economic Interests in Africa

U.S.-China Economic and Security Review Commission invites submission of proposals to provide a concise, one-time unclassified report on China’s economic interests in Africa and linkages between economic and security engagement. Proposals must be submitted by February 10, 2020 at 5:30pm EST.

The Chinese Military’s Role in Overseas Humanitarian Assistance and Disaster Relief: Contributions and Concerns
Over the past two decades, the Chinese People’s Liberation Army (PLA) has expanded its involvement in humanitarian assistance and disaster relief (HA/DR) missions outside China’s borders. Through its contributions to HA/DR, Beijing has provided important assistance to disaster-stricken populations and sought to burnish its image as a “responsible stakeholder” in the international system. At the same time, Beijing routinely allows political considerations to guide its participation in HA/DR missions, violating the humanitarian spirit of these operations and suggesting Chinese leaders may view HA/DR less as a global good than an instrument of influence. Moreover, the PLA has cooperated haltingly with international partners during these missions and at times willfully disregarded best practices for military participation in HA/DR. This report examines the drivers behind the PLA’s increasing participation in HA/DR abroad; the impact, both positive and problematic, of the PLA’s involvement in several recent multinational disaster relief operations; and the implications of the PLA’s involvement in and approach to these missions for the United States.
Research

Hong Kong's Proposed Extradition Bill Could Extend Beijing's Coercive Reach: Risks for the United States
In April 2019, the Hong Kong government formally proposed an extradition bill that would—if passed into law—increase the territory’s susceptibility to Beijing’s political coercion and further erode Hong Kong’s autonomy. The bill, which followed a minimal public comment period and could face a final vote before July 2019, would amend Hong Kong’s laws to allow ad hoc extraditions to mainland China and over 100 countries and territories without mutual extradition arrangements with Hong Kong. In addition to further intruding into Hong Kong’s affairs, the proposed bill could create serious risks for U.S. national security and economic interests in Hong Kong, and potentially violate several key provisions of the U.S.-Hong Kong Policy Act of 1992, which outlines U.S. policy toward the territory. This issue brief provides background on the bill and observers’ concerns with the proposal, risks posed to U.S. interests in Hong Kong, and considerations for Congress.
Research

China’s Pursuit of Space Power Status and Implications for the United States
China seeks to become an international leader in space, or what it terms a “space power in all respects.” In this role, Beijing aspires to lead international space-related innovation and exploration and establish an advanced system of infrastructure to serve its space sector. China has suffered some setbacks on projects crucial for the progression of program milestones, such as its heavy-lift launch vehicle program, and still lags behind the United States in its human spaceflight and space station program. Nevertheless, China’s space program is a source of national pride, and its consistent high level of political support and funding ensures progress toward establishing itself as a space power. In 2003, China joined the United States and Russia as a member of the exclusive group of countries to have conducted human spaceflight, and since then it has nearly completed a new, rival global navigation satellite system (GNSS)—set for completion in 2020—and demonstrated its willingness to undertake high-risk, high-reward missions, as reflected by its historic landing on the moon’s far side in 2019. China is likely to achieve future milestones in areas where it is lagging behind international standards on shorter timetables than when the United States accomplished similar missions. This report examines China’s space goals and national space strategy; its progress toward those goals, including an examination of China’s progress in its advanced launch vehicle, long-term crewed space station, and lunar exploration programs; and the primary entities involved in setting and implementing its space policy. Finally, the report assesses the implications of China’s space program for the United States and its continued leadership in space.
Research 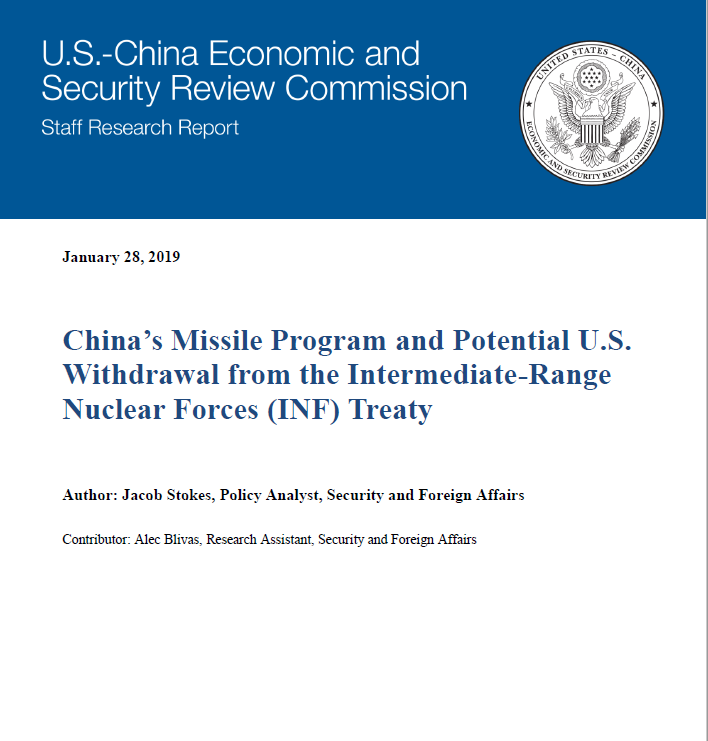 China's Missile Program and Potential U.S. Withdrawal from the Intermediate-Range Nuclear Forces (INF) Treaty
The Trump Administration cited China as a major reason behind its decision to announce U.S. intentions to withdraw from the 1987 Intermediate-Range Nuclear Forces (INF) Treaty with Russia. China is not a party to the INF Treaty, which has allowed Beijing to rapidly expand its missile arsenal as part of a military strategy designed to counter U.S. and allied military power in Asia. China has consistently refused to accede to the accord and expressed its opposition to U.S. withdrawal, positions that implicitly recognize the advantages Beijing derives from being unconstrained by the treaty’s limits. This report explains the importance of China’s ground-launched missiles to Beijing’s overall military strategy; surveys Chinese reactions to the potential U.S. withdrawal from the INF Treaty; and assesses both the positive and negative implications of U.S. withdrawal for the military balance in Asia, global arms control regime, U.S. relations with Asian allies, and China-Russia ties.
Research

Request for Proposals: Report on China's Space and Counterspace Capabilities and Activities
The U.S.-China Economic and Security Review Commission invites submission of proposals to provide a one-time unclassified report on China’s space and counterspace capabilities and activities. Electronic or hard-copy proposals must be submitted by 5:00PM (EST) on February 20, 2019.
Research

China's Engagement with Latin America and the Caribbean
The United States maintains close cultural, economic, and security ties with countries in Latin America and the Caribbean (LAC). While the United States remains the largest economic and security partner in LAC, in the last decade China has rapidly deepened its economic, diplomatic, and military engagement to become the region’s largest creditor and second-largest trading partner. China’s efforts in the region are driven by four key objectives: (1) ensuring its access to the region’s abundant natural resources and consumer markets; (2) gaining LAC support for its foreign policies; (3) shaping LAC perceptions and discourse about China; and (4) gaining geopolitical influence in a region geographically close and historically subject to U.S. influence. Closer ties with China may reduce U.S. influence in the region; they can also reinforce the region’s overreliance on highly cyclical exports and create unsustainable debt burdens for some LAC countries, which China could use for political leverage. This report examines China’s objectives in the region, its economic, diplomatic, and military and security engagement in Latin America and the Caribbean, and the implications of its expanding regional presence and influence for the United States.
Research

China’s Overseas United Front Work: Background and Implications for the United States
China uses “United Front” work to co-opt and neutralize sources of potential opposition to the policies and authority of its ruling Chinese Communist Party (CCP). The CCP’s United Front Work Department (UFWD)—the agency responsible for coordinating these kinds of influence operations—mostly focuses on the management of potential opposition groups inside China, but it also has an important foreign influence mission. To carry out its influence activities abroad, the UFWD directs “overseas Chinese work,” which seeks to co-opt ethnic Chinese individuals and communities living outside China, while a number of other key affiliated organizations guided by China’s broader United Front strategy conduct influence operations targeting foreign actors and states. Some of these entities have clear connections to the CCP’s United Front strategy, while others’ linkage is less explicit. Today, United Front-related organizations are playing an increasingly important role in China’s broader foreign policy under Chinese President and General Secretary of the CCP Xi Jinping. It is precisely the nature of United Front work to seek influence through connections that are difficult to publically prove and to gain influence that is interwoven with sensitive issues such as ethnic, political, and national identity, making those who seek to identify the negative effects of such influence vulnerable to accusations of prejudice. Because of the complexities of this issue, it is crucial for the U.S. government to better understand Beijing’s United Front strategy, its goals, and the actors responsible for achieving them if it is to formulate an effective and comprehensive response.