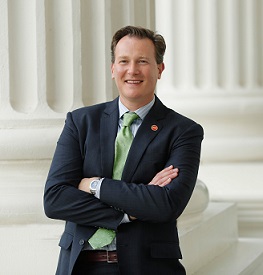 Commissioner Andreas Borgeas is an educator with expertise on China and Central Asia.  He has worked overseas in numerous academic and professional capacities, including as a Fulbright Scholar, Contributing Fellow for the Woodrow Wilson Center, and a Policy Specialist Fellow at the U.S. Embassy in Kazakhstan. He conducted his graduate and doctoral field research in, and published extensively on, China and neighboring Central Asian Republics, receiving his graduate education at Harvard University, Georgetown Law School and Panteion University of Political Sciences. After clerking for a federal district judge he practiced international law at Luce Forward. Elected to serve in the California State Senate, he is also an adjunct professor of international security at the Middlebury Institute of International Studies. Commissioner Borgeas was appointed by House Republican Leader Kevin McCarthy for a term expiring December 31, 2020.